Why You Need To Start Your Own Business To Become FinanciallyIndependent 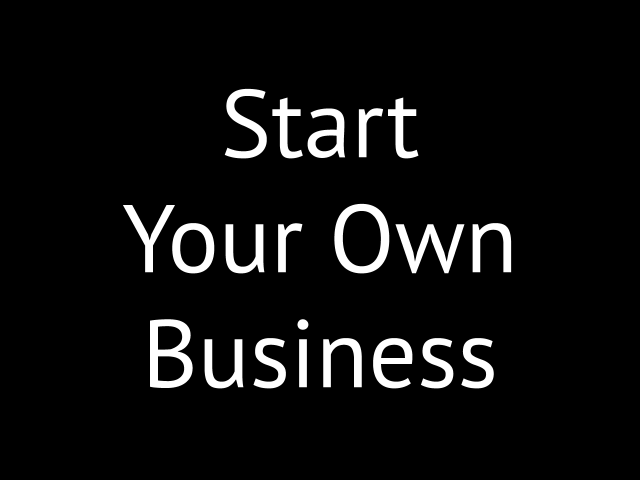 In my last post I talked about how to become financially independent. I talked a little about how to break it down into steps from your smallest bill to your largest. Determine how much money you need to save that would generate enough income to pay those bills. The missing ingredient here is how to get a large enough pool of money to live off so that you don't have to work. Exactly how do you do that?

The first thing that you need to do is to create a mindset that you are going to create a fund to live off of. Once you have done that you will need to set up that account and put money into it. At first I wouldn't worry about what kind of account it is. A regular savings account will do. You have to get in the habit of putting money into it first.

The second thing is to have a goal - a preliminary target to that huge number you need to save up to be able to not work and live off the money you have saved up. In my previous article, I set my first smaller target at $7200. If I can find a way to set aside that much money and earn 5 percent interest somewhere, then I will have become financially independent up to my water bill of $30 per month.

The third thing is to have a way to fund that account up to that target amount. There are a few ways to get your account funded. The first and most obvious is to earn that much money, put it in an account and to not spend it. The second way is to sell some things you own to raise that amount of money. There are more ways but those are the basic two that jump out at me right away.

I'm going to talk about another way to raise the money to fill my account and that's to start my own business.

You see, there are two basic types of people in the world. Those who make stuff and those who buy stuff. The people who make the vast majority of stuff we have is the side you want to be on. You want to be a producer of some sort. You want to make things that you can sell. Most of us are consumers of some sort. We spend all that we make and then some.

This sort of thinking is what traps us into a life of never getting ahead. To get where we want to go, we need a vehicle. That vehicle is your own business.

Your own business can do two things for you. The first is that it can make you money. The second is that it is an asset that you can sell later for a much larger amount than it cost you to buy it. If you can create an income stream that makes you money, you have something you can sell.

The hard part is figuring out exactly what that business should be. I will talk more about that in my next post.

You must have ESP. We already have a business,but just started to look into another. This one will start up slow but needs baby steps. I will post in forum.