Home Podcast Success Starts When No One Is Watching

Success Starts When No One Is Watching 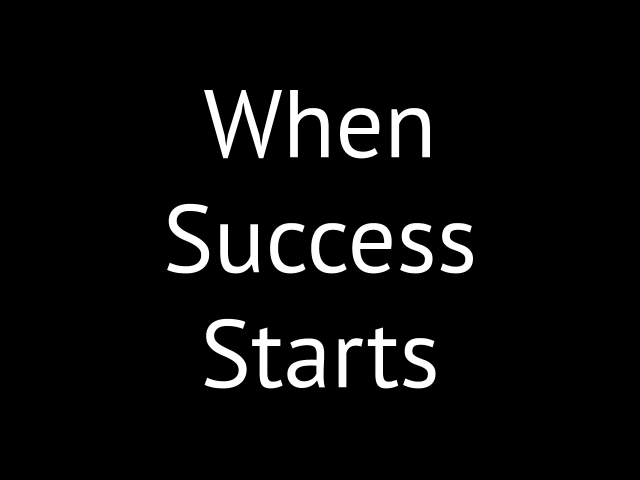 If you follow me, you will not doubt notice that I will go through stretches of time where it seems like nothing is happening. And on your end, that might seem to be the case. Behind the scenes though, it's a different story. I'm plotting my next move and working towards goals that I have set for myself. What I have noticed throughout the years is that people seem to be more likely to do the things they need to do to make their life more successful if they know that someone is watching and witnessing them make progress. This is productive for a lot of people who need group interaction and the "pat on the back" that you accomplished something is really rewarding.

But true success is garnered by those who do the things that need to be done when no one is watching. It took me a long time to develop the ability to motivate myself to take action even though there is no one to tell me to do it.

In fact, for the first several years of working on my own, I spent a lot of time wasting time and telling myself I will definitely get started tomorrow. I'll eat better, tomorrow. I'll start working out, tomorrow. I'll make that first phone call to drum up business, tomorrow. Invariably, I would find myself on the next day saying the same thing and tomorrow keeps getting pushed back day after day.

Unfortunately, this is a bad habit and it's also one that is very difficult to break.

It's tough to break because non action is always easier than taking action.

Your ability to take action might be impaired for a variety of reasons but in the end there are two things that you need to remember. One is that those things are just excuses. And the second is that, it just means your mental strength needs work.

Building this mental strength is tough if we believe what our mind tells us. And it's a lonely job too. No one is going to build our mental strength for us. We have to own it. And make that task our priority number one.

Because building that mental strength to accomplish will lead you to great things and a better life.

I'm often inspired by stories of people who spend most of their time practicing their craft. Looking for that edge that will help them when they need it most. For the most part, these stories come from athletes who spend countless hours practicing for a two hour game.

One of the ones that always comes to mind is Larry Bird who played in the NBA. He came from a small town in Indiana. From what I've heard, he practiced more than anyone else he played against. He spent countless hours in the gym by himself shooting all the shots he might take in the game from all parts of the floor. So, when it came time for the game, he knew he would hit the shot when it mattered. Why? Because he had taken it hundreds if not thousands of times prior to that moment by himself. This devotion to practice by himself earned him huge pats on the back by the fans who watched him. But during his practice times there was no one there doing that for him. He dug deep within himself and his own mental strength to summon the energy required to take action when no one was watching.

It's this attention to detail that separates those who succeed versus those who don't. Who takes the time to study the things they do on a daily basis and makes a checklist and then follows it?

Who takes the time to hone that checklist into a finely tuned machine to get it done in the most effective manner?

Who does the things that nobody wants to do when no one is there to tell you you did a great job doing that?

I can tell you that it's small minority of the people you know. That's why success is so elusive.

But that should also bring you encouragement. And that's because there is no one stopping you from doing those things but yourself.

Start doing the little steps that lead to success and you'll start seeing the success. You'll become part of that minority of successful people.

YOU can do that. It just takes getting started and taking action. Start today.

This is very good and a eye opener. Every day I try to fine tune my routines. Some days it gets so easy.

Hey. I found your site from the comment you made on SPI about the niche site duel 2.0

I'm looking forward to seeing how you do on the 1000 posts in 1000 days challenge. I'll keep stopping by to read what you have to say.

Sounds good. The goal is out there. Now it's time to execute it.