Home Motivation Do Or Do Not, There's No Talking About Doing

Do Or Do Not, There's No Talking About Doing 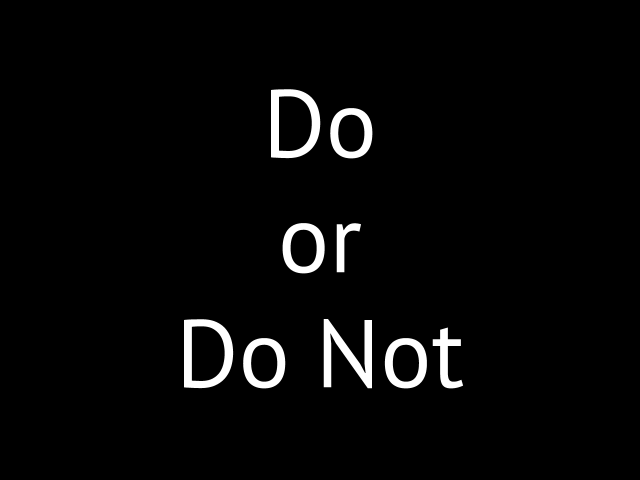 One of the basic rules I have here at the Black Belt Project, as part of my Dojo Kun, is to do first, then talk about what you did AFTER it's been successfully completed. Often people take the opposite approach. They decide to do something, talk about what they decided they want to do and then more often than not, don't end up doing it. This leads to a feeling of failure not only within yourself but it also paints a picture of failure in the minds of others if you consistently talk about doing but never actually do it.

I've been guilty of this and maybe you have to. And, I'm sure, like me, you can think of specific people you've come across in your life that are all "talk" and after awhile they lose credibility with you because you know it's just not going to happen. Eventually, you just quietly tune out the next grand idea they have.

I am not sure who started it, but I think the most prevalent advice out there is that you should set a goal and then tell everyone what the goal is that you set. This public announcement of your goal is somehow supposed to make yourself accountable to yourself and put more pressure on you to do it and make you think twice about not following through because of peer pressure.

Then there's also the feeling that when set a goal you want to reach that telling others about it somehow makes them your goal police.

I'd say this approach is more common for activities like weight loss. You set a goal like I'm going to lose so many pounds and then you tell your family that you are going to lose so much weight. Then, put the onus on them to make sure your reach your goal. You might say, if you see me eating this or that, get on me about it and don't let me do it!

Making others your goal police puts them in an uncomfortable position that they don't care to be in and can create animosity between the goal "police" and the goal "law breaker".

The important thing to remember about goals is that they are YOUR goals. It's not my goal. It's not your co-worker's goal. Whether you reach your goals is honestly not important to everyone else most of the time and so we don't really care and the last thing we want to do is make sure you do what you said you needed to reach your goal. We are busy trying to reach our own.

When I make this kind of goal public, there are some general reactions you can expect. The first is that if the goal is BIG, there is no belief you will reach it anyway. People ignore goals that seem un-achievable. So until there's action behind the goal, it won't garner much attention. The web is pretty crowded.

There's also the likelihood that if you knew me personally and I had a habit of making lofty goals all of the time and this is 100th time I have revealed my big time goal to you and you knew I hadn't reached the other 99, that you won't put much stock into it either.

And as much as I hate to say it, while most people want others to be successful, some don't want you do something that makes you more successful than them. Because of that, there's also the possibility that my reaching my goal might make threaten you in some way. It might either threaten your self esteem, the way you make a living or any number of things that I never dreamed might have had that effect on you and instead of having an ally in my journey to reach my goal, now I might actually have a saboteur involved that might try and prevent me from reaching my goal.

With that being said, let's say that now you know my goal that I revealed in the post above and now, it's out there. Many people will eventually find out about it. And let's say that we are a thousand days into the future and I did indeed do as I predicted and successfully reached my goal.

Psychologically, this is going to bring forth confidence of others in me that if I set another lofty goal, because I have done it once before, there will be a belief that there is a good chance I will probably do it again.

It's that confidence, that faith and belief that we can accomplish what we set out to do, that we want to build here in me, in you and in all of those who take the time to study my work.

It's my opinion though, that the best way to build that belief in myself, or you in yours, is to do FIRST and then talk about what you or I did after we have done it.

I had lunch with some clients the other day and before the lunch one of the gals got her phone out and showed us a picture of her about a 100 pounds heavier. Having never met her before, I never knew she was overweight. And everyone else I was with never expected that either.

I could tell inside that she was very proud of herself and she should be. Those good feelings that came from accomplishing her weight loss and the praise that we gave her, she deserved in every way. Everyone wanted to know how she did it, how long it took and so on.

Sometimes, I think, it's those feelings that we are often really after when we set a goal even though all we have done is say what we want to others. We want them to cheer us on, reinforce their belief in us and help us get there and share the journey with us. We WANT people to treat us like we have already reached our goal. But in reality, that kind of real positive support is asking a lot of others and people don't live up to the expectation.

When they don't, it's a downer and makes it harder to achieve what we really want.

Compare this already successfully feeling of the woman I met who already reached her goal and lost over a 100 pounds to being overweight, setting a goal to lose a certain amount of weight and then failing to lose it. Now, compound that with others knowing her goal and realizing she might not achieve it. Then compound that with a lack of good feelings that go with being successful and that no one is telling you how great you are like they would be if you had been like her.

There's no comparison. The first feeling leads to more success while the second feeling contributes to a feeling of failure that can easily lead to more and more failure.

This is why I believe it's better to keep goals private and only share successes.

So from here on out, I want you to set goals privately and share completion of goals publicly. The size of the goal is unimportant. It might be that all you did was get out of bed today. Whatever it is, every goal is small enough to keep to yourself until you reach it. And every success is big enough to share with everyone - no matter how small - ALWAYS.

This is a fantastic article. I have been thinking about this exact issue for a while but, have never been able to articulate it as clearly as you do here. Great job.

Thanks Luke. I was wondering if you were still out there. Great to hear from you!